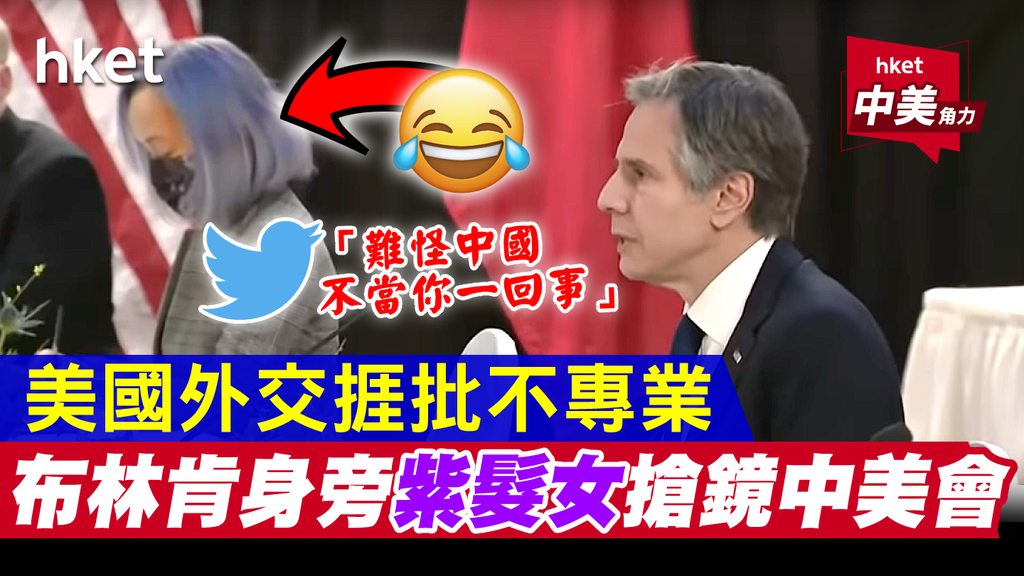 The opening scene of the China-US talks was full of gunpowder. The U.S. representative first spoke overtime and launched attacks. The China-US talks were held in Alaska. As the host, the United States did not even treat guests to a meal, and diplomacy was questioned. During the Sino-US talks, a mysterious woman with purple hair was sitting beside the US Secretary of State Blincol, which aroused much discussion from the outside world. It turns out that this purple-haired woman is an American translator. Many foreign netizens also think that dyeing her hair purple to attend international conferences seems to be very unprofessional in American diplomacy. “No wonder China is not treating the United States!”

The opening speech of the first China-US meeting in Alaska was for the media to film. In addition to the tit-for-tat remarks from both sides, a woman on the right hand side of Blinken also attracted the attention of the outside world. The woman’s purple-gray shoulder-length hair is particularly prominent in the US delegation. And her face did not match the US officials attending the talks. It turned out that she was an interpreter for the US delegation.

China and the United States held a high-level strategic dialogue amidst the tense relations between the two countries. The United States unexpectedly sent a purple-haired translator to the meeting, causing the outside world to question what happened to American diplomacy.

Some netizens bluntly said: “She attended high-risk political occasions with purple hair, but was not immediately driven away. The United States is weak, and China knows it well.” Some people pointed out that purple and colorful hair are common in the art world, but they are not suitable. Diplomatic occasions.

Some people believe that this is the performance of the Biden administration aiming to please the left-wing “progressives”, and responds to reports in the US media that China believes that the Biden administration is flooded with “white leftists” (white leftist liberals, who are slightly derogatory, and they think they especially love to sing high-profile. ), wrote “So yes, the Chinese make sense.”

The talks are not just about arguing with the U.S. representative, revealing what was really talked about

Someone said: “China-confident, firm and direct. The United States-rhetoric, immature blame games and purple hair.” “It is impossible to believe that the United States said “America is back” in such high-level diplomatic negotiations.”

Some American right-wing commentators also mocked the Biden administration with this: “They said that Brinken was the best negotiator of the State Department, at the peak of his state… He brought a Zifa staff member to the summit with the Chinese Communist Party. Sitting there shyly, the Chinese ate his lunch in front of him.”

The opening 8 minutes changed to 1.5 hours. The Chinese side: the United States overdue first and then rushed to reporters (there is a film)

Yang Jiechi has another sentence from the US media: Blinken was surprised

Full text of the transcript of the China-US talks, China denounces the United States for not being condescending, and that old problems need to be corrected

Former US military officer: Fighting for Taiwan is the most stupid gambling to recover from serious injuries